How Plastic Toothbrushes Are Helping To Destroy The World! 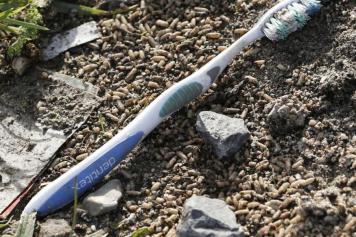 The history of plastic toothbrushes and how they pollute our planet

Plastic toothbrushes do not end up in landfill only; they also get into our forests, rivers and oceans. (Photograph: Stevie O’Cuana/Shutterstock)

LEIPZIG, Germany: A couple of weeks ago, the US company 4Ocean, which specializes in removing plastic waste from the ocean, shared a post on Facebook that shows visually just how much our oral hygiene routine contributes to the world’s plastic pollution crisis. These striking photographs capture multiple buckets filled with colorful toothbrushes washed ashore on the beaches of Bali and picked up by the local clean-up crew. In the comment sections, many readers stated that they could not understand how or why so many toothbrushes ended up in the ocean in that area, or for that matter, in any other part of the world. The answer to this question is quite simple when you look at the history of plastic toothbrushes. 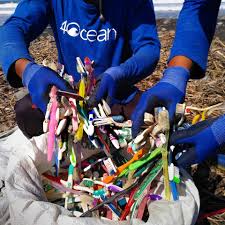 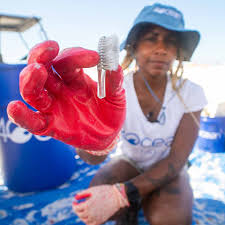 (All images from 4Ocean https://legacy.4ocean.com/blogs/blog/in-the-news-log-3-plastic-around-the-world )

PHOTO: In some areas off the coast of Roatan, Honduras, trash is surpassing the amount of seaweed. (Supplied: Caroline Power)

Just off the Caribbean island of Roatan lies a massive pile of floating garbage.

It spans kilometers of ocean and consists of everyday plastic items like chip packets, cutlery and zip-lock bags and even thongs.

The emergence of this rubbish patch is likely due to recent hurricanes that struck the region, one of Australia's top scientists has said.

"It is shocking and it's very confronting", said Dr Britta Denise Hardesty, the principal research scientist for oceans and atmosphere at the CSIRO.

"I wish I could say that I'd never seen anything like that before."

The CSIRO completed a survey at more than 200 sites, every 100 kilometers around Australia's coastline, with some areas so remote scientists used sea planes to reach the beaches.

"Even in places that are as remote as the Kimberly, every single one of those beaches had trash on it, whether it's tires or fishing gear, toothbrushes or balloons and things like that," Dr Hardesty said.

"Some of the highest concentrations of plastic pollution floating in our ocean were just inside the Great Barrier Reef.

How Our Toothbrushes Are Littering Paradise

A new survey of remote islands off the coast of Australia found mountains of plastic weighing as much as a blue whale.

A new survey estimates the Cocos Keeling Islands are covered in more than 400 million pieces of plastic. Credit Cara Ratajczak

“Welcome to paradise,” beckons the Cocos Keeling Islands’ Visitor Center. The island chain is popular with vacationing Australians, and it’s easy to see why.

Photos from the chain of 27 islands, of which only two are inhabited, feature oceans that are nothing but swirls of translucent turquoise, cobalt and cerulean, and sandy beaches so pristine they feel untouched.

But a 2017 survey by researchers from the University of Tasmania and Victoria University, both in Australia, found the islands covered in some 414 million pieces of plastic weighing a total of 238 metric tons (roughly the same weight as a blue whale). The results were published Thursday in the journal Scientific Reports.

Only two of the Cocos Keeling Islands are inhabited, with 470 people living on Home Island and 100 people on West Island. Plastic was also found on South Island, above, which is uninhabited. Credit Cara Ratajczak

The use of plastics, especially single-use plastics, has skyrocketed since the 1990s according to Jennifer Lavers, a research scientist at the Institute for Marine and Antarctic Studies at the University of Tasmania and the lead author on the study. “That plastic has to go somewhere and a lot of it is ending up, unfortunately, in countries where waste management can’t deal with it. And it ends up in our rivers and into our oceans,” she said.

The ocean’s plastic problem is twofold: there’s a lot of it — the study authors estimate that there are more pieces of plastic in the ocean than there are stars in the Milky Way — and it kills marine life.

Fish, birds, sea turtles and marine mammals can become entangled in plastic soda can rings and discarded fishing nets, or can choke on the debris if they eat it. And studies suggest that some marine life don’t just accidentally eat plastic — they seek it out. That’s because over time, marine plastic can absorb aquatic odors making them smell uncannily like food to some fish and bird species. When these animals eat the plastic instead of real food, they also get a dose of chemicals such as PCBs and heavy metals that the plastic absorbs from the environment.

A separate study released this week in the journal Communications Biology found that plastic in the oceans also harms prochlorococcus, the marine bacteria responsible for producing 10 percent of the world’s oxygen.

Dr. Lavers chose these islands for the study because their relatively isolated location means that there are relatively few sources of local pollution and not much human activity such as beach cleanups. This enabled the team to see how much plastic from the world’s oceans ended up deposited on the islands.

But some 60 percent were microplastics, or bits that break off when a piece of plastic is buffeted around. These microplastics can be as small as .08 inches, or roughly half the size of a grain of rice.

“It should serve as yet another warning that yes, our local actions can have long-distance effects,” Thomas Ballatore, a teaching fellow at Harvard University who has studied plastic pollution and was not involved in this study, said by email.

Toothbrushes are among plastic wastes that snag on corals and deliver microbial infection. Image: NOAA Marine Debris Program, CC BY 2.0

Scientists have established yet another hazard from the millions of tons of plastic waste that tip into the sea: it delivers microbial infection to the world’s coral reefs.

When plastic pollutants snag on coral reefs, the likelihood of disease rises from 4 per cent to 89 per cent, they calculate. That is an increase in risk of more than twenty fold.

And the impact on the world’s reefs—already under increasing hazard from ocean acidification and from bleaching in extremes of heat—could be devastating.

“Plastic debris acts like a marine motor home for microbes,” said Joleah Lamb, a researcher at Cornell University in the US. She began gathering data while at James Cook University in Australia.

“Plastics make ideal vessels for colonising microscopic organisms that could trigger disease if they come into contact with corals.

“Plastic items—commonly made of polypropylene, such as bottle caps and toothbrushes—have been shown to become heavily inhabited by bacteria. This is associated with the globally devastating group of coral diseases known as white syndromes.”

Our work shows that plastic pollution is killing corals.

She and colleagues from the US, Canada, Australia, Myanmar, Thailand and Indonesia report in the journal Science that between 2011 and 2014 they surveyed 124,000 reef-building corals from 159 reefs in the Asia-Pacific region.

One third of the reefs surveyed were polluted with plastic waste, the highest in Indonesian waters, the lowest off the Australian coast.

They calculate that, right now, the number of plastic bags, cups, bottles, toothbrushes and bits of packaging snagged on the reefs in the region could be 11.1 billion. By 2025, there could be 15.7 bn plastic objects stuck on the same reefs.

And, they report, the presence of plastic was associated with a 20-fold increase in risk of disease, and in particular infections know to marine biologists as skeletal eroding band disease, white syndrome and black band disease.

The items snagged on the corals deprived them of sunlight and oxygen, and weakened the coral to the point at which invasive pathogens could gain a hold.

“What’s troubling about coral disease is that once the coral tissue loss occurs, it’s not coming back,” Dr Lamb said. “It’s like getting gangrene on your foot and there is nothing you can do to stop it from affecting your whole body.”

The Asia-Pacific region is home to more than 55 per cent of the world’s coral reefs. Complex reef structures—reefs with branching corals, for instance—were eight times more likely to trap floating plastic waste.

Coral reefs are among the richest habitats on the planet: a diseased or dying reef can no longer provide food and shelter for a vast range of sea creatures.

Pollution and disease also put at risk much of the estimated $375bn value that reefs offer to 275 million people as sources of fisheries, tourism and coastal protection.

“Our work shows that plastic pollution is killing corals. Our goal is to focus less on measuring things dying and more on finding solutions,” said Drew Harvell, professor of ecology and evolutionary biology at Cornell, and one of the authors.

“While we can’t stop the huge impact of global warming on coral health in the short term, this new work should drive policy toward reducing plastic pollution.”

This story was published with permission from Climate News Network.

The Importance of Flossing